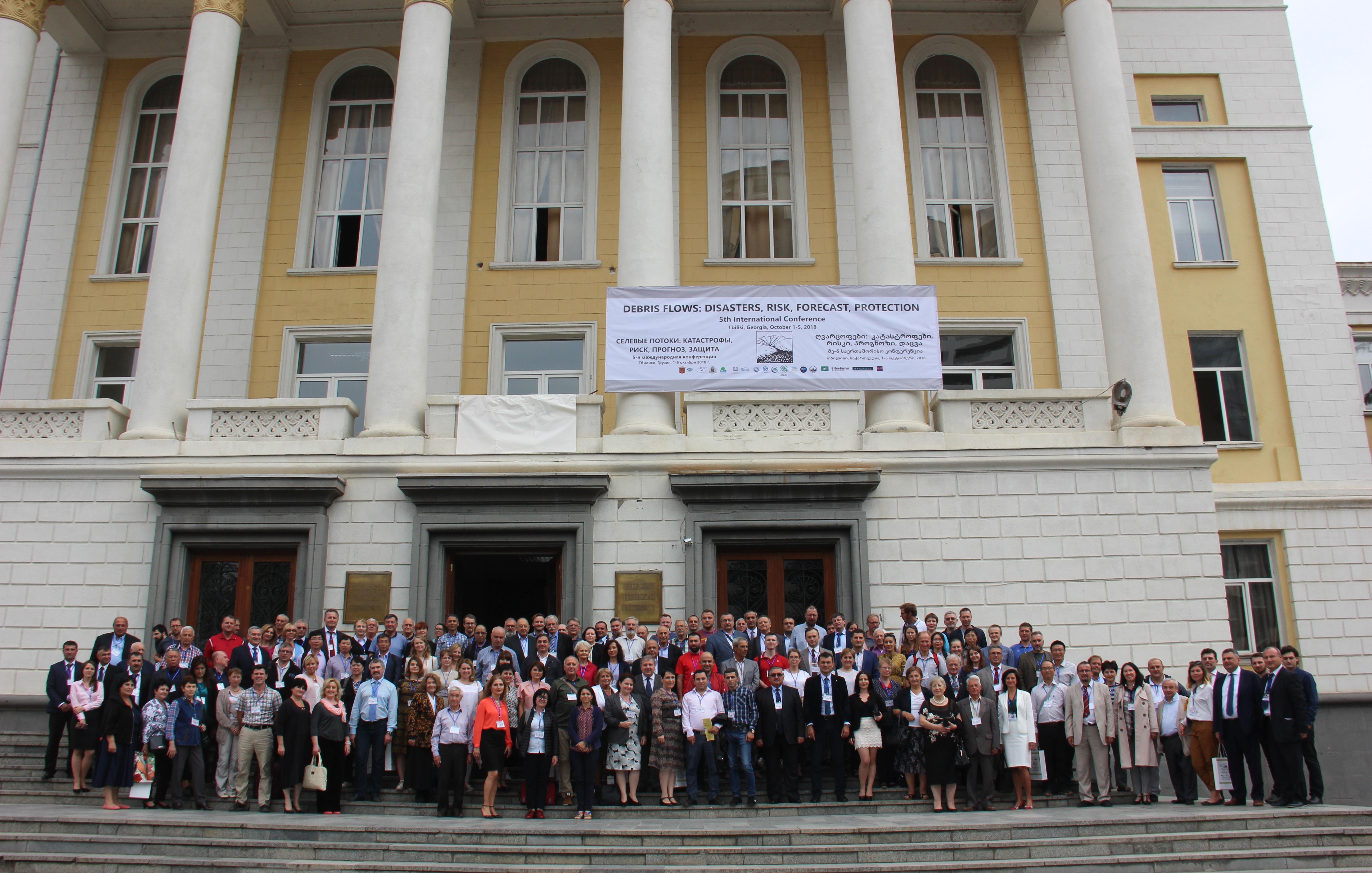 Conferees in front of the building of the Georgian Technical University. Tbilisi, October 1, 2018. Photo by Giorgi Daraselia.

Debris flows in mountain regions cause significant damage to economy and quite often lead to victims among the population. The solution of debris flows problem requires cooperation of experts from various countries. Among the forms of such cooperation are the conferences on Debris Flows: Disasters, Risks, Forecast, Protection. The fifth such conference held in Georgia continues a series of the conferences under the same name held in Pyatigorsk (2008), Moscow (2012), Yuzhno-Sakhalinsk (2014), Irkutsk and Arshan (2016).

The conference in Georgia was organized by the Debris Flow Association together with the Tsotne Mirtskhulava Water Management Institute of the Georgian Technical University in cooperation with the government services of Georgia (Ministry of Education, Science, Culture and Sport and Ministry of Environment Protection and Agriculture), UNESCO, Lomonosov Moscow State University, Faculty of Geography, Aga Khan Agency for Habitat, High Mountain Geophysical Institute, Chongqing Institute of Green and Intelligent Technologies and Institute of Mountain Hazards and Environment, Chinese Academy of Sciences, Laboratory of Physical Geography, National Center for the Scientific Research, France, Engineering Academy of Georgia, Ecocenter for Environmental Protection. The conference was sponsored by IBTP Koschuch e.U., Geo-Barrier, Caucasus Road Project, and Geobrugg AG, that participated in the conference exhibition. The chief information partner of the conference was Geomarketing Publishing Center.

The Georgian Technical University (GTU) was the venue of the conference activities. Welcome speeches were made by GTU rector A. Prangishvili, Acting Head of the Service on Emergency Management of Georgia Sh. Khutsishvili, director of the RAS Institute of Geography O. Solomina, director of the Mountain Geophysical Institute M. Bekkiev, representative of UNESCO K. Tovmasyan, Deputy Director of the Chongqing Institute of Green and Intellectual Technologies F. Wei, programs leader of the Laboratory of Physical Geography, National Center for the Scientific Research and University Panthéon-Sorbonne of Paris-1 V. Jomelli, President of Debris Flow Association S. Chernomorets.
The Minister of Education, Sciences, Culture and Sport of Georgia M. Batiashvili visited the conference which was covered by the Georgian media and television.

Presentations were submitted by both experienced and young researchers. The geography of the studied regions covered mountain territories of Western and Central Europe, the Caucasus, Siberia, the Far East, Central Asia, Qinghai-Tibet Plateau, the Himalayas, North Africa, South America, the Arctic and Antarctica.

The combination of science and practice in debris flow studies is emphasized with the list of 59 organizations in which the conferees work:

– governmental ministries and agencies of Georgia (Ministry of Education, Science, Culture and Sport; Ministry of Regional Development and Infrastructure; National Environmental Agency of the Ministry of Environment Protection and Agriculture; Emergency Management Agency);

At the closing ceremony of the conference, the highest awards of Debris Flow Association – Fleishman medals were handed out. O. Natishvili (Georgia), R. Genevois (Italy), E. Talanov (Kazakhstan) and D. Znamensky (Brazil) were awarded for their achievements in the field of debris flows investigation and promotion of international cooperation.

The Georgian Technical University organized a concert for conference participants at which the dancing staff and choir of the university performed. 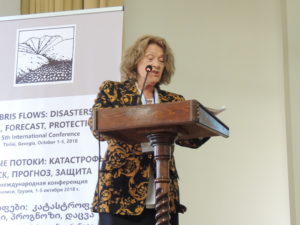 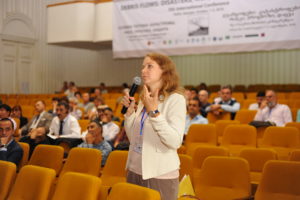 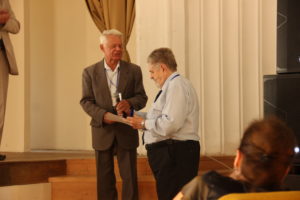 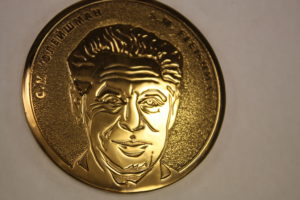 Proceedings of the conference are published as a collection of papers which includes 77 articles and in two issues of the Georisk journal (Russia). Publications of the conferees show the state-of-the-art in theory and methods used in debris flow investigation. It is hoped that the articles will be useful to decision-makers in the sphere of debris flow protection, researchers and practical experts. The published materials could be also used by university teachers and students when studying the debris flow phenomena. 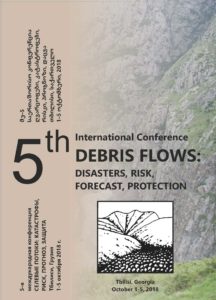 Proceedings of the conference 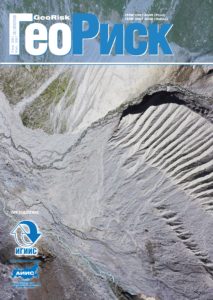 The Georisk journal (No. 3, 2018) with articles of the conference participants

An important element of the international undertaking was the post-conference field seminar which included two visits to debris flow basins of Georgia. The first trip included the inspection of eastern regions of Georgia – the historic frea of Kakheti. In the debris flow basin of Duruji, several decades long stationary investigations of debris flows were carried out accompanied by the experiments for creation of devices on studying debris flows and antidebris-flow constructions. 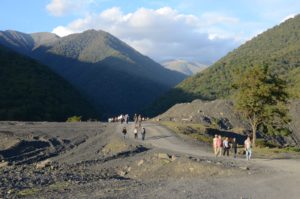 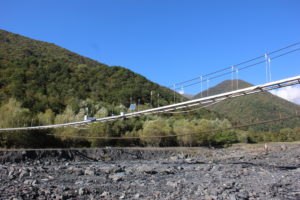 The debris flow warning system at the Duruji River. Photo by Sergey Chernomorets. 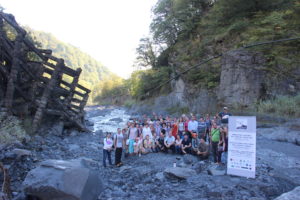 Conferees near the destroyed dam at the Duruji River upstream the Kvareli town. Photo by Irina Kargapolova.

The second trip was aimed at studying the area of the Georgian Military Road – one of the most ancient trade ways of mankind connecting the territories to the north and to the south of the Greater Caucasus Range. Investigation of debris flows in the Caucasus began within that territory in the middle of the 19th century. On the slopes of Mount Kazbek the well-known catastrophic Kazbek blockages arose, the latest of which took place in 2014. Participants visited the dam of Zhinvali hydroelectric power station in the Aragvi River valley, examined the upper courses of Belaya Aragvi and Terek river valleys, and visited the place of Kazbek blockages. 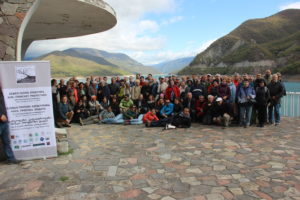 Conferees on the dam of Zhinvali hydroelectric power station on the Aragvi River. Photo by Irina Kargapolova. 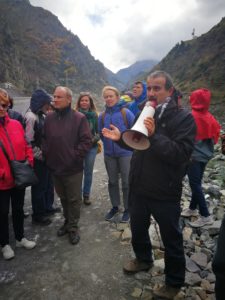 At the place of Kazbek ice and stone blockages in the Terek River valley. Photo by Kaiheng Hu. 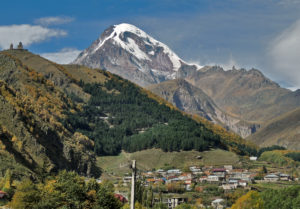 Mount Kazbek and the Gergeti settlement. Photo by Mikhail Dokukin.

According to the decision of the Presidium of Debris Flow Association and Organizing committee, the next 6th conference “Debris flows: disasters, risk, forecast, protection” will take place in the fall of 2020 in Tajikistan.